Review: All Men Fear Me (Alafair Tucker, #8) by Donis Casey 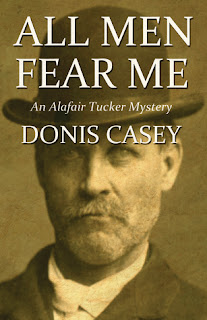 The U.S. has finally entered the First World War and scheduled the first draft lottery. No one in Boynton, Oklahoma, is unaffected by the clash between rabid pro-war, anti-immigrant "patriots" and anti-conscription socialists, who are threatening an uprising rather than submit to the draft. Alafair Tucker is caught in the middle when her brother, a union organizer for the Industrial Workers of the World, pays her a visit. Rob Gunn is fresh out of an internment camp for participants in an Arizona miners’ strike. He assures Alafair that he's only come to visit family, but she's not so sure. More unsettling, Alafair's eldest son enlists, and a group calling itself the “Knights of Liberty” vandalizes the farm of Alafair’s German-born son-in-law. Alafair’s younger son, 16-year-old Charlie, is wildly patriotic and horrified by his socialist uncle. With his father's permission Charlie takes a part-time war job at the Francis Vitric Brick Company. Soon several suspicious machine breakdowns delay production, and a couple of shift supervisors are murdered. Everyone in town suspects sabotage, some blaming German spies, others blaming the unionists and socialists. But Charlie Tucker is sure he knows who the culprit is and comes up with a plan to catch him red-handed. And then there is old Nick—a mysterious guy in a bowler hat who's been hanging around town.

All Men Fear Me by Donis Casey is the eighth book in the Alafair Tucker series. This is a historical mystery series set in Oklahoma in the early twentieth century. This is an awesome series that I highly recommend.

All Men Fear Me is set during World War I. America is finally entering the world war and the young men are eager to sign up. Alafair is worried that her two sons will want to sign up. And she is also worried about her German born son-in-law. All Men Fear Me realistically portrays the suspicious feeling toward anyone with a German name or foreign sounding name during this time period.

Donis Casey's books are always well written tales with flowing plot lines. She also stays true to her characters. I love following the trials and tribulations of the Tucker family. All Men Fear Me is an excellent addition to the series. I loved the surprises at the end.

I highly recommend All Men Fear Me and am looking forward to the next in the series.