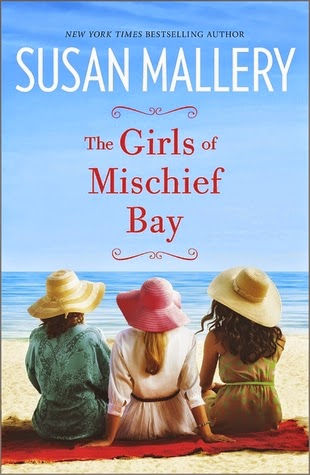 New York Times bestselling author Susan Mallery is world renowned for her "insightful, funny, and poignant" stories (Booklist). With her brand-new Mischief Bay series, Susan brings to vivid color the story of three friends on the brink of a new life.

Nicole Lord wants to be a good wife, but there's a difference between being supportive and supporting her husband, who quit his job to write a screenplay she's never seen. He won't even help take care of their son, leaving Nicole to run the house and work full-time at her Mischief Bay Pilates studio. Can she say enough is enough without losing the man she loves?

Sacrificing a personal life for her career is how Shannon Rigg rose to become vice president in her firm, but she wonders now whether she made the right choice. An exciting new relationship with a great guy convinces her that it might not be too late—until he drops a bombshell that has her questioning whether she can have it all. And if she can, does she want it?

Although Pam Eiland has a beautiful house and a husband she adores, she feels… restless. She wonders who a stay-at-home mom becomes after the kids are grown. Finding sexy new ways to surprise her husband brings the heat and the humor back to their marriage, but when unexpected change turns her life upside down, she'll have to redefine herself. Again.

Through romance and heartbreak, laughter and tears, three very different women will discover that friends can become family, and that life is richer with sisters at your side.


With more than 25 million books sold worldwide, New York Times bestselling author Susan Mallery is known for creating characters who feel as real as the folks next door, and for putting them into emotional, often funny situations readers recognize from their own lives. Susan’s books have made Booklist’s Top 10 Romances list in four out of five consecutive years. RT Book Reviews says, “When it comes to heartfelt contemporary romance, Mallery is in a class by herself.” With her popular, ongoing Fool’s Gold series, Susan has reached new heights on the bestsellers lists and has won the hearts of countless new fans.

Great first book in a new series by one of my favorite romance authors Susan Mallery. Mischief Bay is a brand new series from Susan that is set in Southern California in a California beach community. In The Girls of  Mischief Bay we are introduced to three women: one in her twenties, one just turning 40 and one just past 50. They are all at different stages in their life and all facing different challenges.

If you are a fan of romances then this is a series that you will want to try. Highly recommend.