Review: Hell with the Lid Blown Off: An Alafair Tucker Mystery by Donis Casey 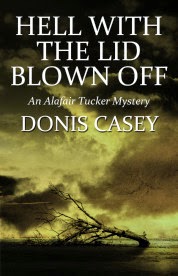 In the summer of 1916, a big twister brings destruction to the land around Boynton OK.  Alafair Tucker’s family and neighbors are not spared the ruin and grief spread by the storm.  But no one is going to mourn for Jubal Beldon, who made it his business to know the ugly secrets of everyone in town. It doesn’t matter if Jubal’s insinuations are true or not. In a small town like Boynton, rumor is as damaging as fact.But as Mr. Lee the undertaker does his grim duty for the storm victims, he discovers that even in death Jubal isn’t going to leave his neighbors in peace.  He was already dead when the tornado carried his body to the middle of a fallow field. Had he died in an accident or had he been murdered by someone whose secret he had threatened to expose? There are dozens of people who would have been happy to do the deed, including members of Jubal’s own family.As Sheriff Scott Tucker and his deputy Trenton Calder look into the circumstances surrounding Jubal’s demise, it begins to look like the prime suspect may be someone very dear to the widow Beckie MacKenzie, the beloved music teacher and mentor of Alafair’s daughter Ruth.  Ruth fears that the secrets exposed by the investigation are going to cause more damage to her friend’s life than the tornado. Alafair has her own suspicions about how Jubal Beldon came to die, and the reason may hit very close to home.

"Bullying, blackmail and natural disaster: just another 1916 summer day in Boynton, Okla. Boynton and the surrounding areas are typical rural communities with many hardworking people and a small group of troublemakers. The hard workers include the family of ever curious Alafair Tucker (Crying Blood, 2011, etc.). Alafair and her husband, Shaw, have 10 children, a farm and little time for much but work. But when their pretty 17-year-old daughter, Ruth, runs afoul of Jubal Beldon, the oldest of six lazy, crude local bullies, Alafair sets aside her chores and turns sleuth. The musically talented Ruth has been spending time at the home of wealthy, widowed piano teacher Beckie MacKenzie, who’s extremely proud of her Scottish heritage and her grandson, Wallace MacKenzie III, who's just come for a visit with his college friend Randal Wakefield. When Ruth is harassed by Jubal and his brothers, she doesn’t mention it to her admirer, deputy sheriff Trenton Calder, who’s furious when he hears about it. Meanwhile, Jubal, who loves to collect dirty secrets, spices up a church picnic by quietly accusing Wallace and Randal of being lovers. After Wallace gives Jubal some cash and a new moneymaking idea, he and Randal high-tail it out of town. Then it's time for a twister to blow through the area, causing indescribable destruction and killing Jubal and a number of others. Nobody, even his mother, is sorry Jubal’s dead—but when the undertaker says he was probably murdered, Sheriff Calder and Alafair must hunt for his killer anyway. A good mystery with an odd final twist is eclipsed by frighteningly detailed descriptions of the terrors of tornadoes."-Kirkus Reviews

"Casey’s warm and wise heroine handles her multiple roles gracefully." —Publishers Weekly review of The Wrong Hill To Die On

"Crying Blood is a thoroughly engrossing evocation of life on a self-sufficient 1915 Oklahoma farm. In Alafair Tucker, mother of ten, Donis Casey has created a clear-eyed woman of her time: pre-ERA, accepting of her place in a male-dominated society, but not hampered by it because she well knows the value of her contributions to her family's well-being. This is my first meeting with Alafair Tucker and her family. It will not be my last." --Margaret Maron, Edgar Award-winning author blurb on Crying Blood

"Those who like their puzzles cloaked in local color from a different time will be amply rewarded." --Publishers Weekly, starred review of The Sky Took Him

"Casey gives convincing voice to the early Midwest much as Sharyn McCrumb does for her Appalachians, including period recipes that help to convey the literal flavor of the era." --Publishers Weekly review of The Drop Edge of Yonder
About the Author
DONIS CASEY was born and raised in Tulsa, Oklahoma. A third generation Oklahoman, she and her siblings grew up among their aunts and uncles, cousins, grandparents and great-grandparents on farms and in small towns, where they learned the love of family and independent spirit that characterizes the population of that pioneering state. Donis graduated from the University of Tulsa with a degree in English, and earned a Master’s degree in Library Science from Oklahoma University. After teaching school for a short time, she enjoyed a career as an academic librarian, working for many years at the University of Oklahoma and at Arizona State University in Tempe, Arizona.

Donis left academia in 1988 to start a Scottish import gift shop in downtown Tempe. After more than a decade as an entrepreneur, she decided to devote herself full-time to writing. The Old Buzzard Had It Coming is her first book. For the past twenty years, Donis has lived in Tempe, AZ, with her husband.
Readers can enjoy the first chapter of each book on her web site at www.doniscasey.com
My Review
I do love this series by Donis Casey! Hell With the Lid Blown Off describes the landscape after a tornado hits Boynton, Oklahoma in the summer of 1916. While several people perished due to the tornado it looks like the town bully was murdered before the tornado hit then was blown to a new location. Alafair Tucker and the local lawmen are left with an abundance of suspects in this murder of a highly unpopular man. Even his family members cannot be ruled out as suspects.

Ms. Casey does an excellent job of representing the state of Oklahoma in 1916 with regard to language, customs and the general way of life. I look forward to each book in this series, which are all very well written, for the history, for the mystery and for the great story.

Fabulous series from Poisoned Pen Press! Be sure to read this entire series. Look out for Hell with the Lid Blown Off in early June.