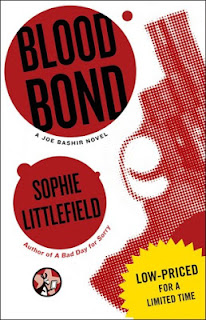 Sexy Pakistani-American Detective Joe Bashir is called to a crime scene in the wealthy foothills of California, where politically ambitious Bryce Engler's dinner party is ruined when a guest's body is found in a pool of blood. Two days later, Engler's beautiful wife Gail lies dead at the foot of a cliff on nearby Mount Diablo.

When Joe turns to Gail's sister Marva for insight into the family history, he discovers that thirteen years earlier, Gail was responsible for the hazing death of a fellow co-ed. Her then-boyfriend engineered a cover-up that deflected blame onto another girl. As Joe searches out everyone who might still hold a murderous grudge, he realizes there was more to the Engler marriage than meets the eye...

Sophie's first novel, A BAD DAY FOR SORRY (Thomas Dunne/St. Martin's Minotaur, 2009) has been nominated for the Edgar, Macavity, Barry, and Crimespree awards, and won the Anthony Award and the RTBookReviews Reviewers Choice Award for Best First Mystery. Her novel AFTERTIME was a finalist for the Goodreads Choice Horror award.

Sophie grew up in Missouri, attended Indiana University, and worked in technology before becoming a stay-at-home mom. She lives in Northern California.

Sophie Littlefield's "Bad Day" series featuring my favorite female bad ass, Stella Hardesty is fabulous.  Blood Bond is her first novel in a new series featuring Pakistani American police detective Joe Bashir.  I was wondering how a white female author would be able to portray a male Pakistani detective and I am glad to say that she does an amazing job!

Littlefield's writing gets better all the time.  This is a riveting novel.  The story feels fresh as we follow the struggles that Joe faces fitting in with the police world and with his family.   There were plenty of twists and turns to keep the reader guessing...plenty of red herrings thrown in our path.  Brilliant plotting keeps the story moving forward at the perfect pace.

I immensely enjoyed this book and I'm looking forward to the next Joe Bashir mystery!