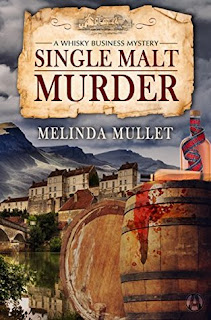 Abigail Logan never expected to inherit a whisky distillery in the Scottish Highlands. But in the first novel of an engaging new series blending fine spirits with chilling mystery, Abi finds that there are secrets lurking in the misty glens that some will go to any lengths to protect . . . even murder.

When Abi inherits her uncle’s quaint and storied single malt distillery, she finds herself immersed in a competitive high-stakes business that elicits deep passions and prejudices. An award-winning photojournalist, Abi has no trouble capturing the perfect shot—but making the perfect shot is another matter. When she starts to receive disturbing, anonymous threats, it’s clear that someone wants her out of the picture. But Abi’s never been one to back down from a fight.

Arriving on the scene with her whisky-loving best friend, Patrick, and an oversized wheaten terrier named Liam, Abi seems to put everyone in the bucolic village on edge—especially her dour but disturbingly attractive head distiller. Acts of sabotage and increasingly personal threats against Abi make it clear that she is not welcome. When one of Abi’s new employees is found floating facedown in a vat of whisky, Abi is determined to use her skills as an investigative journalist to identify the cold-blooded killer and dispense a dram of justice before he strikes again. But distilling truth from lies is tricky, especially when everyone seems to have something to hide.

Melinda Mullet was born in Dallas and attended school in Texas, Washington D.C., England, and Austria. She spent many years as a practicing attorney before pursuing a career as a writer. Author of the Whisky Business Mystery series, Mullet is a passionate supporter of childhood literacy. She works with numerous domestic and international charities striving to promote functional literacy for all children. She lives in Washington, D.C., with her family.

Abi Logan inherits her uncle's scotch whiskey distillery in Scotland.  As soon as she arrives in Scotland from her London home she discovers that many interests are competing to buy the distillery from her. And there is sabotage occurring at the distillery. Soon there is a murder and Abi is kept busy trying to discern who is helping her and who is hindering her efforts.