Review: The Return of the Raven Mocker (Alafair Tucker #9) by Donis Casey 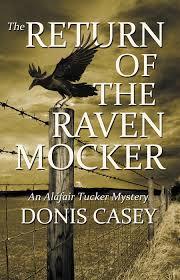 World War I is raging in Europe, but as the deadly influenza pandemic of 1918 sweeps like a wildfire through Boynton, Oklahoma, Alafair Tucker is fighting her own war. Her daughter, Alice, and son-in-law, Walter Kelley, have both come down with the flu, and Alafair has moved into town to care for them after quarantining her young children at their sister s farm. Boynton as a whole isolates itself like an old English plague village, discouraging anyone from coming into town and the residents from traveling outside. A new doctor applies science to treating the stricken, but Alafair applies all she knows about hygiene, nutrition, and old and trusted country remedies. Unable to aid her sons and sons-inlaw fighting overseas, this is danger she can combat. One autumn afternoon, screams coming from next door alert Alafair that Alice s neighbor, Nola Thomason, and her son Lewis have suddenly and unexpectedly succumbed. Yet there is something about the way the pair died that causes Alafair to suspect their deaths were due to poison rather than to influenza. The epidemic is so overwhelming that it is many days before the only doctor left in town can confirm Alafair s suspicions; neither Nola nor Lewis died of the flu. The only witness to their deaths, twelve-year-old Dorothy Thomason, a special friend of Alafair s daughter, Sophronia, is so traumatized that she is rendered mute. Were Nola and her son murdered, and if so, why? The usual motives for murder are greed, or jealousy, or hatred. Or could it be, as Alafair fears, that the Raven Mocker, the most dreaded of the Cherokee wizards or witches, the evil spirit who takes to the air in a fiery shape to rob the old, the sick, and the dying of their lives, is hunting victims and bringing misery to the innocent?"

Grimly realistic, this unusual mystery―—ninth in the series―—set during the flu pandemic of 1918, graphically portrays, from a caregiver’s perspective, nursing the desperately ill and witnessing horrible deaths, while also worrying about loved ones fighting overseas. Vividly rendered and psychologically astute, this somewhat transparent puzzler provides an unusually immersive perspective on familiar historical territory. (Jen Baker Booklist)

The Return of the Raven Mocker (An Alafair Tucker Mystery) by Donis Casey is a compelling book. I gave it five stars because the characters came to life and kept my attention.~~~ I had not read Donis Casey's books before and am thrilled to discover an established series. I added all of them to my wish list. (Carolyn Injoy-Hertz NetGalley)

The mystery comes in second (or maybe third) to history lessons and paeans to traditional American values in this folksy tale of small towns and big hearts. (Kirkus)

Casey’s thoughtful ninth Alafair Tucker mystery (after 2015’s All Men Fear Me) ably evokes rural Oklahoma in 1918. In remote Boynton, farm wife Alafair prays for an end to the hostilities in Europe as her youngest child starts school. Meanwhile, the flu pandemic of that year turns Boynton into a battleground. Townspeople by the score fall ill, the Tucker children are unofficially quarantined at a relative’s home, and Alafair moves into town to nurse her daughter Alice and Alice’s husband, who are both sick with the flu. When Alice’s neighbor Nola Thomason and her adult son, Lewis, die suddenly, Alafair suspects foul play rather than flu, a concern exacerbated by the discovery that Nola’s husband has taken out a $25,000 insurance policy on her life. In tandem with new-to-town medic Emmett Carney, Alafair sleuths and keeps her loved ones safe. Readers may find Alafair’s huge extended family hard to keep straight, but the homespun mood remains winning, while the impact of world history on the Ozarks is skillfully evoked. (Publishers Weekly)

What a great time to commit murder. During a major pandemic. Who's to know? Who's going to even notice? A delightful story. One not to be missed if you are fascinated by the Spanish flu outbreak of 1918. (Cherei McCarter Goodreads)

The Return of the Raven Mocker is the ninth Alafair Tucker mystery by author Donis Casey. I have read the previous books in the Alafair Tucker series and found them all to be fascinating, well written and informative.

The Return of the Raven Mocker. The title of the book itself is enough to grab anyone's attentions. How intriguing can you get? The Raven Mocker is an evil bigfoot being from Cherokee mythology who robs the old, sick and dying of their lives. As the Spanish Flu Epidemic of 1918 barrels through Boynton, Alafair is reminded of the Cherokee myth and doesn't even want to hear the name Raven Mocker.

Donis Casey gives the reader a history lesson without them even realizing it. I learned so much about the Spanish Flu Epidemic from this book. But someone in Boynton is using the flu epidemic to cover up a murder. And Alafair figures this out early and the hunt is on. With the assistance of a new young doctor sent to help with the epidemic, Alafair is able to see through the deception.

I love the characters that author Casey has created in Alafair's family and the town of Boynton. Alafair's large family is fighting World War I in Europe and the Spanish Flu at home. Opening The Return of the Raven Mocker, the reader is transported immediately into the realm of the Tucker farm and their lives. It is always a fascinating world to dive back into.