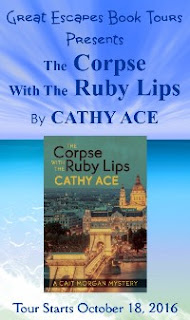 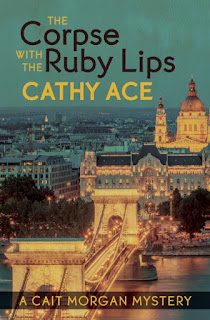 A new book from Bony Blithe award–winning mystery author Cathy Ace where her sleuth Cait Morgan investigates a chilling cold case from a university in Budapest.


A gig as guest lecturer at the university in Budapest should have been a dream job for a travelling criminologist and food lover. But wherever Cait Morgan goes, murder seems to follow. One of Cait’s new students pleads with her to solve the mystery of her grandmother’s brutal slaying. She agrees, but when she is repeatedly hassled by a weird colleague, and as bizarre details about the student’s family members come to light, Cait is beset by uncertainty.

As she gets closer to the truth, Cait's investigation puts the powers-that-be on high alert, and her instincts tell her she's in grave danger. Bud races to Budapest to come to Cait's aid, but will it be too late?


Cathy Ace loves crime! It’s true – she discovered Nancy Drew in her local library, then found Agatha Christie on her Mum’s bookshelves, and she never looked back. Cathy happily admits that the characters she met between the book-covers as a child have influenced her writing. “Nancy Drew was plucky, strong and independent, and Agatha Christie’s puzzles engaged me every time. I love the sort of book that mixes intricate plotting with a dash of danger, and that’s what I’ve tried to create with my Cait Morgan Mystery Series. Beginning my new series, featuring the women of the WISE Enquiries Agency, I have been able to indulge my love of stately homes, village life and the interplay between characters that can take place in that sort of setting.”

Born and raised in Swansea, South Wales, Cathy is, like her heroine Cait Morgan, now a Canadian citizen. “Cait’s Welsh Canadian, as am I. They say ‘write what you know’, so a short, plus-sized Welsh woman, who’s quite bossy, fits the bill! But Cait and I are not one and the same: she’s got skills and talents I don’t possess,and I’m delighted to say that I don’t usually encounter corpses wherever I go! I’ve also chosen to burrow even deeper into my roots by creating a new cast of characters in the WISE women who come from all four corners of the United Kingdom and work in a uniquely British setting – a ducal estate set in the rolling Welsh countryside of the Wye Valley in Powys, where I spent a good deal of time when I was young.”

With a successful career in marketing having given her the chance to write training courses and textbooks, Cathy has now finally turned her attention to her real passion: crime fiction. Her short stories have appeared in multiple anthologies. Two of her works, “Dear George” and “Domestic Violence”, have also been produced by Jarvis & Ayres Productions as “Afternoon Reading” broadcasts for BBC Radio 4.

The Corpse with the Ruby Lips by Cathy Ace is the eighth book in the Cait Morgan series. I have read most of the books in this series and they are all fabulous.

The Corpse with the Ruby Lips takes the reader to Budapest where Cait is teaching a course at the university there. One of Cait's students approaches her about the murder of her grandmother when her grandfather was teaching at Cait's university in British Columbia. Cait and her husband Bud get drawn into this cold case from years ago. Bud had to stay behind in BC to look after his aging parents after his mother had a fall. Cait's student has a crazy family including an uncle who is a famous author. The family is filled secrets and Cait just cannot stay away from them.


I love that the Cait Morgan series is based in the area that I live. I love the familiar landmarks such as Hatzic which is where we had a cabin for years. I love the University of Vancouver which is similar to my university..Simon Fraser which is actually located in Burnaby. Author Cathy Ace brings fentanyl into the story which is interesting...it is the latest scourge to hit the world of addicts. You will see how she works it in.

A pleasure to read. I highly recommend The Corpse with the Ruby Lips.