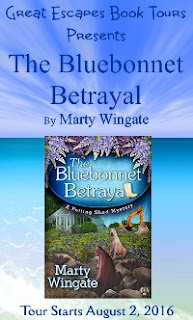 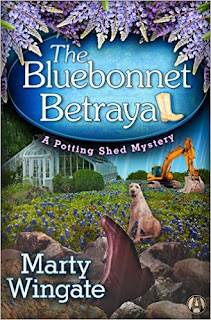 Pru’s life in England is coming full circle. A Texas transplant, she’s married to the love of her life, thriving in the plum gardening position she shares with her long-lost brother, and prepping a Chelsea Flower Show exhibit featuring the beloved bluebonnets of the Texas hill country. Technically, Twyla Woodford, the president of a gardening club in the Lone Star State, is in charge of the London event, but Pru seems to be the one getting her hands dirty. When they finally do meet, Pru senses a kindred spirit—until Twyla turns up dead.

Although Twyla’s body was half buried under a wall in their display, Pru remains determined to mount a spectacular show. Twyla would have insisted. So Pru recruits her husband, former Detective Chief Inspector Christopher Pearse, to go undercover and do a bit of unofficial digging into Twyla’s final hours. If Pru has anything to say about it, this killer is going to learn the hard way not to mess with Texas.

“Classy, clever, and utterly charming . . . Brew a pot of tea and settle in with this immensely enjoyable mystery.”—Rosemary Harris, author of Pushing Up Daisies and The Bitches of Brooklyn, on The Garden Plot

“Just know that Marty Wingate knows how to write a cozy mystery very well and that you will be hooked from page one.”—A Bookish Way of Life, on The Red Book of Primrose House

“Pru Parke is one of my favorite cozy mystery heroines.”—Michelle’s Romantic Tangle, on Between a Rock and a Hard Place 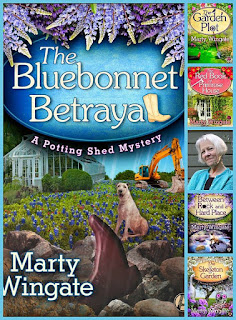 Marty Wingate is a Seattle-based writer and speaker about gardens and travel. She is the author of the Potting Shed mysteries from Random House/Alibi, about Pru Parke, middle-aged American gardener who moves to England and digs up more than weeds. The first two in the series are The Garden Plot and The Red Book of Primrose House, followed by the third in late summer 2015. Her new cozy mystery series, Birds of a Feather, begins in June 2015 with The Rhyme of the Magpie. You can hear Marty on the podcast A Dry Rain, free from iTunes and always available at adryrain.net. She leads garden tours to European and North American destinations.

The Bluebonnet Betrayal is the fifth book in the Potting Shed Mystery series by author Marty Wingate. I have been aware of this series for a while but this is the first book I've read in the series. If I had known that the writer, Wingate, was so talented I would have started the series sooner!

I love gardening and Pru Parke is a gardener extraordinaire. She is a native Texan married and living in England. She has been asked by a gardening group from Austin to help with their entry in the Chelsea Flower Show...now I really want to go to the Chelsea Flower Show! The display garden being presented by the Texans is a bluebonnet scene typical of the Hill Country. Twyla Woodford is the head of the group and Pru becomes very concerned when the rest of the group arrives in London without Twyla. Then, before she is there 24 hours, Twyla is found dead in the display garden.

The Bluebonnet Betrayal is a great mystery. There are plenty of suspects and the reader is taken down a few wrong paths. I didn't figure out the murderer for quite some time.

I loved the London setting and the Chelsea Flower Show setting. Fascinating. The characters were all well fleshed out and I enjoyed getting to know them. Pru has found a gem in husband Christopher.

Highly recommend The Bluebonnet Betrayal and I am looking forward to reading more of Marty Wingate's books.