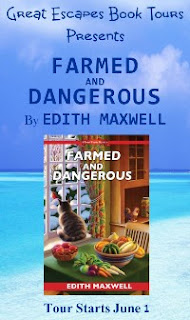 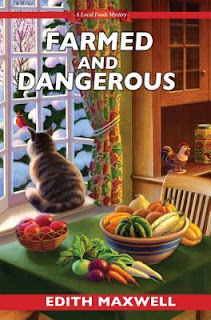 Snow is piling up in Westbury, Massachusetts, and Cam Flaherty’s organic farm has managed to survive the harsh New England winter. Unfortunately murder seems to be the crop in season…

Cam is finding the New Year just as hectic as the old one. Her sometimes rocky relationship with Chef Jake Ericsson is in a deep freeze, she’s struggling to provide the promised amount of food to the subscribers in her first winter CSA, and her new greenhouse might just collapse from the weight of the snow. Supplying fresh ingredients for a dinner at the local assisted living facility seems like the least of her worries—until one of the elderly residents dies after eating some of her produce.

Cantankerous Bev Montgomery had a lot of enemies, from an unscrupulous real estate developer who coveted her land to an aggrieved care provider fed up with her verbal abuse. But while the motives in this case may be plentiful, the trail of poisoned produce leads straight back to Cam. Not even her budding romance with police detective Pete Pappas will keep him from investigating her.

As the suspects gather, a blizzard buries the scene of the crime under a blanket of snow, leaving Cam stranded in the dark with a killer who gives new meaning to the phrase "dead of winter."

Edith Maxwell is an Agatha-nominated mystery author. Her Local Foods Mystery series, featuring organic farmer Cam Flaherty and a colorful Locavore Club, is published by Kensington Publishing. Edith once owned and operated the smallest certified-organic farm in Essex County, Massachusetts. The third book in the series, FARMED AND DANGEROUS, releases in 2015.

Edith’s Lauren Rousseau mystery series (written as Tace Baker) from Barking Rain Press, features a Quaker linguistics professor and small-town Massachusetts intrigues. BLUFFING IS MURDER released in 2014. Edith is a member of the Society of Friends (Quaker) and holds a doctorate in linguistics.

Her short stories have appeared in History and Mystery, Oh My!, That Mysterious Woman, Kings River Life Magazine, three Level Best Books anthologies, Fish Nets, Burning Bridges, and the Larcom Review. She is active in Mystery Writers of America and Sisters in Crime and is the Vice President of SINC New England.

Edith, a fourth-generation Californian, has two grown sons and lives in an antique house north of Boston with her beau, their three cats, a small organic garden, and some impressive garden statuary. She worked as a software technical writer for almost two decades but now writes fiction full time.

Farmed and Dangerous features farmer Cam Flaherty, a female Cam, who lives on her great-uncle's farm in rural Massachusetts. She has been specializing in providing food to locavores...people who like to eat locally raised food. Her great-uncle is living in a care home which is where a lot of the action takes place.

Cam's boyfriend is a local state policeman. Their relationship was front and center in the book. They are both interesting, well-written characters. Farmed and Dangerous is filled with plenty of interesting characters! I learned a lot about farming and the movement to eat local.