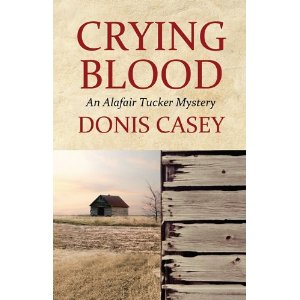 In the autumn of 1915, Shaw Tucker, his brother James, and their sons, go on a hunting trip to the derelict farm his stepfather had bought years before.

Instead of a quail, Shaw’s dog, Buttercup, retrieves an old boot with the bones of a foot inside. Buttercup then leads the men to a shallow grave and a skeleton with a bullet hole in the skull.
That night, Shaw awakens to see a pair of moccasin-clad legs strolling by his tent flap. He chases the intruder, who has disappeared so completely that Shaw wonders if he imagined it. Had he also imagined the ghostly voice that called his name?

After he returns home, Shaw can’t shake the memory of the disembodied legs and the ghostly voice. His concern is justified when he realizes that someone – or something – has followed him home.
His dread turns to relief when he captures a young Creek Indian boy who says he is Crying Blood. The boy had followed Shaw, hoping to find a white haired man who killed his brother.

Shaw ties the boy up in the barn, but during the few minutes he is left alone, someone thrusts a spear through Crying Blood’s heart.

Who murdered a boy right under Shaw’s nose? The law is on the killer’s trail, but Shaw Tucker has a hunch about the identity of the white-haired man who called his name.

Only Shaw’s wife, Alafair, might be able to forestall his dangerous plan. So when the opportunity arises, Shaw sends her on a wild goose chase. As soon as she is out of the way, he sets out to confront the killer.
Sometimes a man has to take matters into his own hands.

Crying Blood is a thoroughly engrossing evocation of life on a self-sufficient 1915 Oklahoma farm.  In Alafair Tucker, mother of ten, Donis Casey has created a clear-eyed woman of her time:  pre-ERA, accepting of her place in a male-dominated society, but not hampered by it because she well knows the value of her contributions to her family’s well-being.  This is my first meeting with Alafair Tucker and her family.It will not be my last.
– Margaret Maron

I was provided an ebook galley of this novel by Poisoned Pen Press through Net Galley for the purpose of this review.

Delightful historical tale set in Oklahoma in 1915.  As a history devotee I was impressed with the detail into which Donis Casey describes life in Oklahoma in 1915.  I don't imagine that people today have any idea how much work it was to run a household one hundred years ago.  In addition to the incredible detail and emphasis on how important hog butchering was to a Prairie family during the story, she also provides amazing detail at the end of the book.  People did not waste anything.  Every single part of a hog was utilized to keep that family alive during the winter months.  What a fabulous reminder of what life was like.  This book really got me thinking about how we live today and how much we waste.  And about how much better for everyone the simple things in life were.  Such an eye opener!

But of course this book starring our sleuth and family matriarch Alafair Tucker is an excellent mystery as well.  Crying Blood was the name of a young Creek boy who follows Alafair's husband Shaw back to the family homestead after a shortlived hunting trip.  Shaw, his brother and several of their sons go on a short hunting trip to a deserted haunted homestead owned by their stepfather.  They encounter a skeleton that has been uncovered due to recent flooding.  The discovery of the skeleton sets off a chain of events that provide closure to events that happened ten years earlier.

The story has an abundance of characters however it is easy to follow as everyone has role to play.  It also helps that Donis Casey has provided a list of the characters at the beginning of the book for reference.  Families were very large in agricultural areas one hundred years so it is very realistic that Alafair's extended family is quite vast!  Twists and turns are easy to follow and lead to a very satisfying ending.

I would highly recommend this book and if you can, get your children to read it, it will open their eyes to how "easy" they really have it these days!  It is also an excellent way to learn or relearn American history.
Posted by PoCoKat at 8:12 AM